In my very last post I said it would get worse. It did.

First, the good news and that comes from Abraham Lincoln (via a French bloke called Jacques Abbadie who may have nicked it from Aesop in the first place).

That Donald Trump has forgotten this one, simple, truism. Which is unusual for a con-man. You see, his whole schtick has been that he could do just about anything if he was a Republican; You can go back and check him saying it on video. That he could shoot someone on Fifth Avenue and so forth… and no-one wanted to believe that he was right.

But it might be the last time he told the actual truth.

All of which puts us here. At the mercy of a madman who is struggling to keep a grip on reality.

The American media has gone into overdrive (I know, I watch it constantly) as people debate the facts, the post-facts and the alternative facts – filling up air time with babble, running around to check the ‘facts’ before another tweet appears and another ‘fact’ needs to be checked.

Why is that good news?

It’s good news because those words -wrongly attributed to Lincoln – are coming back to haunt President Trump. No matter how many times a day he tweets, no matter what he forces his underlings to defend from a podium or on a news show he can only ever win the support of his base. He already had the most votes he was ever going to get and even then it was 3 million votes short of a majority.

Trump seems to think that by continuing in the same vein he will get the same results and that, like so much that he believes, is simply not realistic or even real. So, a majority of Americans are actually sane and we should be grateful for that. However…

Very few of those sane people seem to be in the US Congress. Despite the fact that this so-called President has already done several things that are, in my opinion, impeachable there are no moves to impeach him because only the Republican majority could do that. And they are clinging on to the tiger’s tail in the hopes that somehow, we don’t know how, but somehow, they make it to the next election.

They aren’t going to impeach him until it is too late.

I was speaking to a friend the other day and had the idea (like a lot of other people) that Trump is an opportunistic hazard waiting to become a dictator. Yes, yes, yes… it’s all Steve Bannon but we are judged by our actions and it is Trump who signs  the orders. It didn’t take me, or other people, long to make the link to the possibility of a Reichstag incident. You can read about that here.

A single incident that became the basis for a complete shutting down of civil liberties, the judiciary… we know the rest.

And, I had to admit, I was worried about that. Until I thought of another incident that would be even worse.

Initially reported as two separate attacks with the North Vietnamese firing first (they didn’t) on the  USS Maddox in the first encounter and with sketchy details of the second encounter the combined incidents were used as the basis for Gulf of Tonkin resolution allowing Lyndon Johnson to counteract communist aggression in the area. 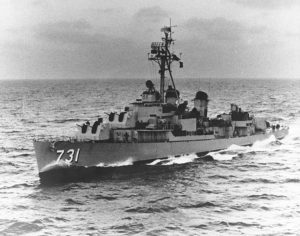 You can see where this leads already, can’t you?

The second incident (August 4th, 1964) never even happened but it was still used as the basis for congressional action. The orange bawheid (a particularly Scottish insult) is already seeing things that aren’t there – illegal voters, inauguration crowds, bowling green attacks – so there is no evidence to suggest that he would be calm and measured should something actually happen. More to the point, he has made up so much already that another fiction isn’t going to pose a problem.

So, something or nothing happens in the middle east and President Tangerine demands the power to support (insert allies here…Israel, Saudia Arabia… doesn’t matter) which gets passed because all he is asking for is the power to act. It doesn’t mean he’s going to.

Of course, it does.

A war in the middle east (we should have kept the oil, maybe we will next time) serves multiple purposes. He’s already put Iran ‘on notice’ and hinted what he would do. All he needs is the match and if he doesn’t get one then he’ll probably just imagine one.

But that doesn’t give him his final result. The war is not an end in itself. Sure, it might be to some people but not to our peachy pal. No, his final win is the shutting down of the protests. Creating an atmosphere where he has to be supported because that is what his fragile ego needs.

The GOP already enacted a state of emergency this week I hear, in a midwestern state, so that they could over turn some ethics laws that were proving troublesome. Do you even doubt for a second that this moron would hesitate to do the same in case of war?

But I promised to end on good news…

And strangely that good news is his insanity. The good news is that he will throw anyone under the bus to make himself feel better; His staff, the congress and (most importantly) the intelligence community are currently coming to terms with this madness but one thing is utterly clear – he will not save them. He will not protect them and as a result, they will not protect him in the end.

Do not try to impeach him first. Go after his aides and allies.

Let the Republican leadership know that when this all falls apart they better have damn good reasons for letting him go this long. That there will be hearings about who knew what, when . And what kept them from addressing the Russian interference.

Keep up the protests, hive off his support and leave him in his bathrobe watching TV – alone in a big house, with his inadequate personality and unable to trust anyone.

They cannot change the world for him. You can’t fool all of the people all of the time… and so, eventually, he will turn on them.

Then they will then turn on him.