A bit of a different post this time. Not that the iniquities of Brexit and Trump and the delay on Scottish independence have been solved, you understand – merely put on hold whilst I subject myself to other tortures. Those who follow me on facebook will be aware of some of them. In my fiftieth year I have taken to…

Which is a frankly ludicrous thing to do and I wouldn’t even have started it had it not been for a job. Some young people we work with decided that they needed to ‘achieve’ something so they picked (and this is why you don’t listen to young people)… climbing Ben Nevis.

Here is the offending mountain on a day I wasn’t there. And neither were very many other people by the looks of it. This photo only glorifies the place and gives no real notion of the stupidity of climbing the thing.

This is a better representation – two-thirds of the way up. There is a cloud in it and this will only get worse. That view behind these half-wits? It will vanish. 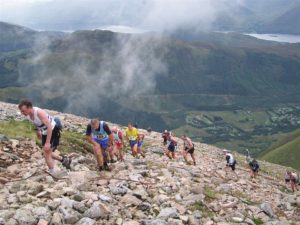 There are sharp rocks in it and these will only become more prevalent. In fact, you will soon be in an alien landscape covered with them. I do believe they were going to carpet it in upturned razor blades but the rocks were already there and do the job just as well.

The full top third of Ben Nevis is covered in scree (an onomatopoeic moniker that echoes the noises you make when you walk) and as I approached this section I was already in bad shape. People on the way down would walk past my colleagues but then stop at me and ask ‘Are you all right?’ So I would smile and tell them a joke to prove that I was not in need of a helicopter.

Then you approach the summit. You don’t know that of course because you could be on Paisley High Street going by the view and that fella on the right? he disappeared into the mist; history does not relate what happened to him after that.

Then you reach the summit itself. Which looks like this. Celebrating is not compulsory but you do feel like doing it just because it means you don’t have to climb any more. 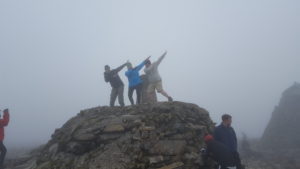 And then you have to go back down.

Which is even worse. By the time I came out of the cloud again I needed a hip replacement and my feet felt like Annie Wilkes had been at them with a hammer.

And all through this we were accompanied by our guide – Sally.

She’s a trained physicist from England who went to the University of Edinburgh and just hadn’t found the hills big enough in her native Yorkshire so she moved to Fort William.

Sally is slim and healthy like you always dreamed of being.

She climbs Ben Nevis four times a week and it is an inconsequential bump in the landscape to her. She walks to the summit and back in the same way that you or I would walk to the kitchen and back. Sally is now so healthy that the countryside is essentially flat  and not really a challenge until it gets vertical.

Oh… And Sally is a lying liar.

Like all people who encounter someone struggling up a hill she tells the same lie. No matter where you are on the hill you’ll hear a variation of;

“You’re past the worst of it”

Which is a lie (or at least it is as far as she knows) because by the end of this trek. With the bottom in sight and a mere 300 metres to descend, my feet felt like I was the little fucking mermaid

who had abandoned the sea in search of true love. They couldn’t have hurt more if you’d taken to them with a hatchet and I swear to you that if I had stood on a lego brick in the car park I would have gone down and never got up again.

We spent 8 and a half hours getting to the top and back down again. It would have been quicker but I was the slowest of us and my chums did the decent thing and waited for me instead of abandoning me like proper people would. As we descended the last 150 metres Sally asked me if I had enjoyed it.

I was dreaming about walking on snooker tables for the rest of my life; snooker tables made of green jelly actually and yet Sally seemed quite surprised when I said.

And ever since then I have struggled to explain that whilst I am glad I did it: That it is, indeed, an achievement. I did not enjoy it.

It was eight and a half hours of pure torture. If you put someone in a room and subjected them to that much pain for that much time you would have created a PTSD patient and breached the Geneva convention.

And yet still – glad I did it.

The closest analogy I have come up with is that of a maths exam. You put your head down at the start and you just keep going to the end. There are bits that are easier and bits that are harder. You don’t know any more at the end than you did at the beginning and it is not pleasant – but you achieved something.

If you ever sat a maths exam then you know what it is like to climb Ben Nevis.

Sally meant to lie when she said you are over the worst. She knew that there were steeper sections, more pain and harder questions to come – but she was actually right. The worst bit isn’t the exam or the mountain. The worst bit is the night before worrying if you can do it.